Is your dog well behaved? He is welcome in my home

I read an article in the New York Times a while ago, called  Who Invited the Dog? about certain people feeling slighted if they are not allowed to take their dogs to social events or family gatherings.

Some even went as far as to bring their dog unannounced to a party that was intended for people-only.

It interviewed many people that consider their dogs family and tend to get upset if others don't have the same enthusiasm for their furry pals.There were a few parts of the article that bothered me and most of the comments did as well.

Assuming the writer presented an accurate portrayal, the descriptions of the dog guardians in the article painted them to be extremely rude, inconsiderate and often ignorant to say the least. The article mentions a few incidents where people brought dogs to social functions or family gatherings where the dog acted completely and utterly out of control.

Two aspects of the article really bother me:

The people interviewed in the article were inconsiderate of their human friends and family. For the most part they had untrained, unruly dogs that they wanted to spring on the rest of the world and did not always understand why people were not as enthusiastic to interact with their dogs. In one instance, one couple's dog was not misbehaved, but they were outraged that their dog could not participate in the activity of unwrapping Christmas presents because the fiancÃ©e of the woman's brother was allergic to dogs. They actually did not speak to the family for months afterwards because their dog was "banished to the guest bedroom".

The comments on the website that resulted from the article were mostly written in such a way as to paint all dog guardians as irresponsible, "dog fanatics" that treat dogs better than people and are basically lunatics.

I cringe when I hear about any irresponsible dog guardians because it makes it more difficult on the rest of us that do train our dogs, exercise them sufficiently, clean up their messes, and act respectful around people that donâ€™t appreciate dogs. The ironic point of inconsiderate dog guardians is that they think their dogs are treated better and will be happier by â€œspoilingâ€ them. Often times this is just a replacement for being lazy. In my experience, dogs are much happier with training, structure and rules rather than allowing them to destroy the house and jump on guest with no rules.

It might take more knowledge and time to actually train a dog, but it is much easier to make the excuse for unacceptable dog behavior by saying that, â€œShe is just spoiled.â€

I also hate to hear people speak with such venom towards dogs. You should read some of the comments in the article. I am not necessarily upset at the person making the comment, but the fact that their view of dogs is so tainted because of so many bad experiences with dogs in the past. I think about all of those misbehaved dogs with irresponsible owners that would be so much happier with sufficient positive reinforcement training and structure.

For the same reason that I wouldnâ€™t want a guest in my home destroying my furniture and being rude to my guests, I would not want a dog in my house doing the same. If everyone humanely trains their dogs and sets ground rules, a lot more people will have the pleasure of meeting well-behaved dogs and both dogs and people would be much better off.

Tags:
dogs in the news dogs in the house dog guests
Tips for dogs afraid of petting
How to be a better dog trainer

Should you re-home your dog? 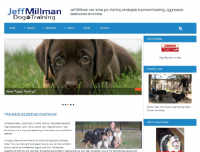